Steam Showers: How to Create a Luxury Home Spa Experience 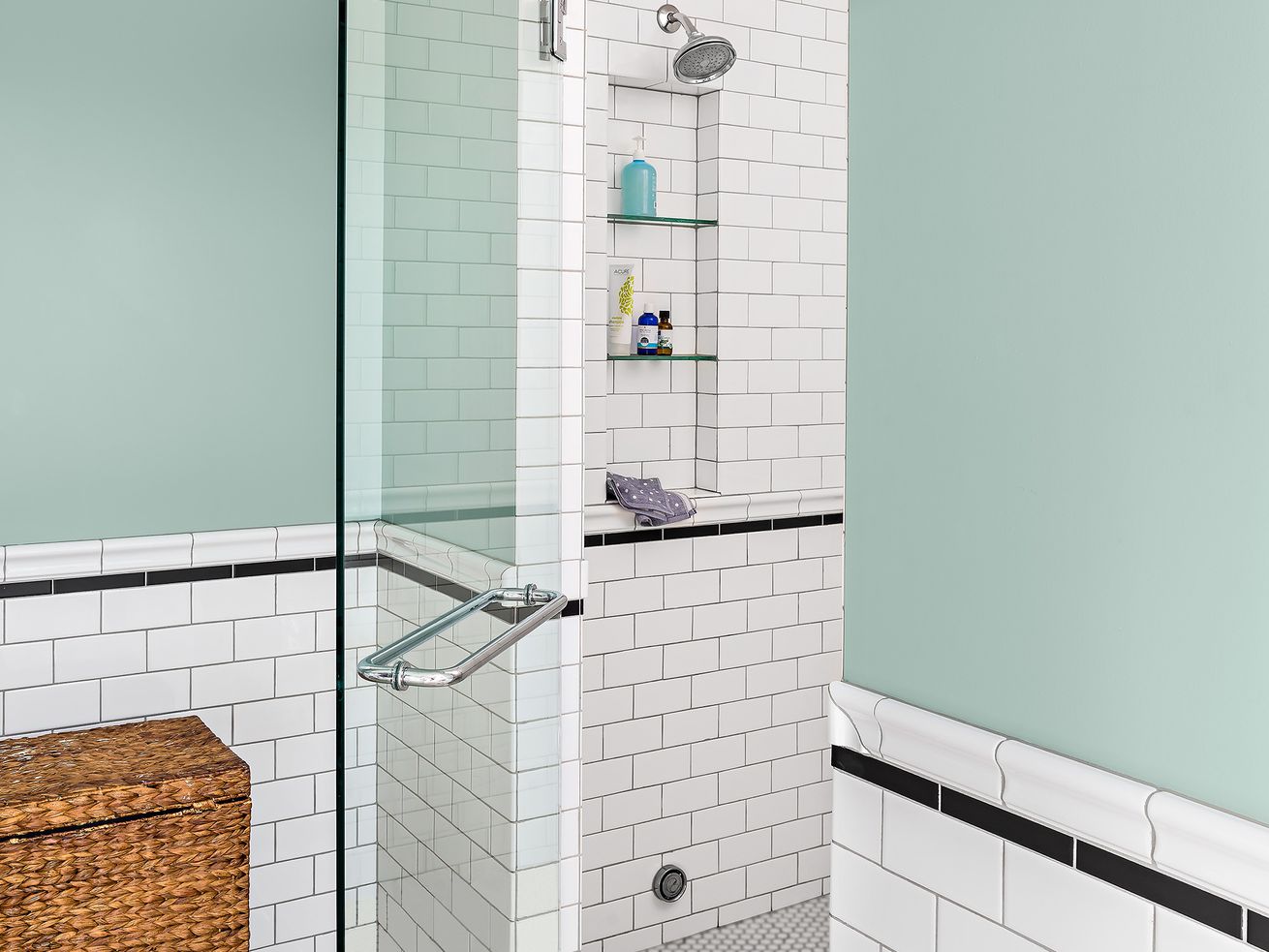 Here’s a guide to installation and costs for a luxury steam shower unit and how to find a dealer.

These days, you may have been hearing homeowners opting to invest in steam showers to recreate a luxury spa experience at home. So what is a steam shower? Simply put, it’s a warm, vaporous steam room haven that takes the place of your ordinary shower stall.

Along with the benefits to your skin and sinuses, a steam shower doesn’t take a long time to generate heat like a whirlpool tub or sauna. And when you’re done steaming, you just turn on the shower for a refreshing rinse.

How Does a Steam Shower Work? 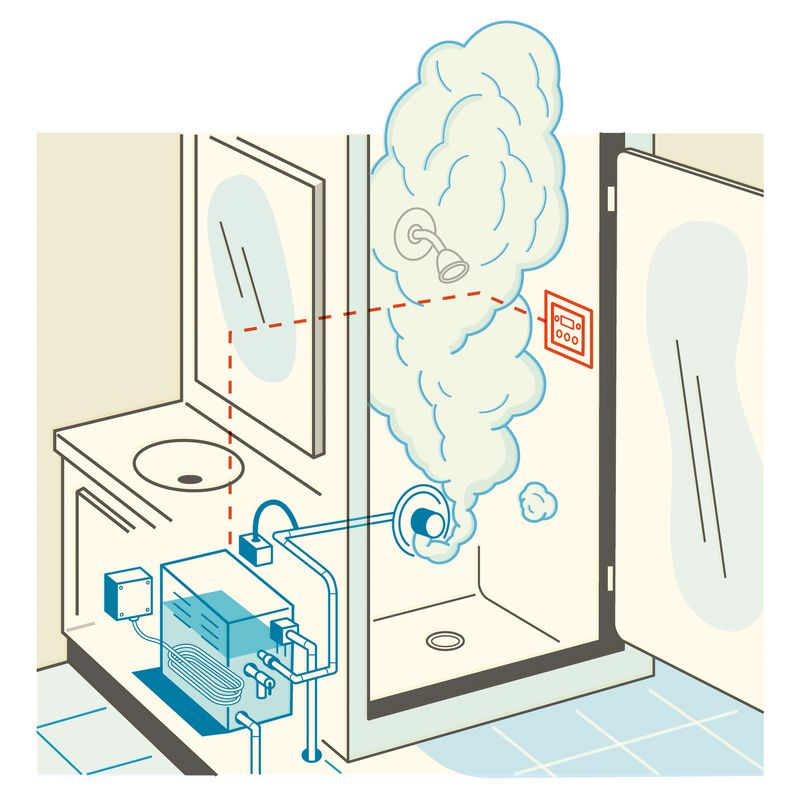 Harry Campbell The Anatomy of a Steam Shower

Steam shower design is fairly straightforward. To summon steam, you simply hit the digital controls in the shower stall. That triggers an electric valve to fill the breadbox-size steam generator with about a gallon of cold water. Then, just like a plug-in teakettle, the generator's electric element brings the water to a boil. A pipe channels the hot vapor to the steam head, or disperser, which fills the stall with tropical moisture that never gets above a safe 118 degrees Fahrenheit.

Luxuriate as long as you want: Steaming for 20 minutes consumes a mere 2 gallons of water. By that reckoning, steam is a "green" way to bathe. (Even a water-saving showerhead sprays about 50 gallons of water in the same period.) Your electric bill is bound to go up, however.

Steam units are sized based on the stall's volume in cubic feet, its shape, and what it's lined with. A typical 4-by-5-by-8-foot stall (160 cubic feet) covered with ceramic tile requires at least a 7-kilowatt generator. For a stall tiled in stone, you'll need twice as much steam-generating capacity.

Harry Campbell The Anatomy of a Steam Shower

Installing one of these at home requires the services of a few pros. First, you'll need a dealer; you can find one locally through the websites of major steam-generator makers, such as Mr. Steam, Steamist, and Thermasol. The dealer will find the best spot to hide the generator, which needs to be within 25 or so feet from the shower stall. (A linen or walk-in closet will do nicely, as long as the equipment is easily accessible for maintenance.)

Then you'll need a tiling contractor and shower-door installer to build you a steam-proof enclosure. When that's ready, the dealer can bring in a plumber to connect all the pipes and an electrician to hook up the generator's 220-volt electric cable and digital controls.

All told, the system should run you about $2,500, installed, plus the cost of the new stall and door. Or for about $2,000 to $4,000, you can get a stand-alone, steam-ready enclosure that just needs to have the wiring and plumbing hooked up, though the space-capsule look of such units might be a bit out of place in your elegant master bath. Overall, a steam shower's cost is far outweighed by its numerous benefits.

The Basics of Steam Showers

What Is a Steam Shower?

A moisture-sealed shower enclosure equipped to deliver clouds of steam before, during, or after your shower.

Cold water piped into a steam generator is heated to the boiling point and then sends fresh steam to an aperture in the shower stall. Digital controls inside the shower let the user adjust the steam's temperature and duration and can even add piped-in aromas, lighting, and music.

What to Look For

Delivery speed: Better models take less than a minute to build up a head of steam. Remote controls: That way, you don't even have to get up from your bench to adjust steam time or temperature. Auto-flush: Reduces calcium deposits on the heating element and saves you from a manual flush-out every 50 uses.

How Much Does a Steam Shower Cost?

A steam generator runs about $2,500, installed. For the full spa experience—mood lighting, a stereo MP3 dock, and a pump for aromatherapy oils—expect to pay another $1,800. A custom steam-proof, tiled enclosure is extra. So generally speaking, a steam shower costs about $2,000 to $4,000.

Where to Find One

Look for local dealers on the websites of major manufacturers, including Amerec, Mr. Steam, Steamist, and Thermasol.

A Stall for Steam

The moisture that a steam shower unit generates will do a number on your shower stall, not to mention your whole bathroom unless the steam shower design is built properly from the studs out.

How to make a stall steam-proof

Slope the ceiling slightly. If you don't, any steam that condenses there will drip down onto your shoulders. Protect wood framing with sheets of 6-mil plastic stapled over studs and joists. Overlap all edges by at least a foot. Seal the seams between the concrete backer-board panels (which are unaffected by moisture) with mesh tape and thinset. Cover every inch of backer board with a waterproof membrane. Use either two coats of a roll-on liquid polymer such as Laticrete's Hydro-Ban, which dries into a seamless, rubbery skin, or embed sheets of flocked polyethylene, like the Kerdi membrane made by Schluter Systems, in wet thinset. Tile and grout as usual. If using stone, apply an impregnator to seal the stone. You'll need to repeat this treatment every two years. Seal around any fixtures that penetrate the tile—including shower and steam heads, digital controls, and valves—with the gaskets or O-rings supplied by the manufacturer.
Facebook Twitter LinkedIn Pinterest
An L.A. Bath Remodel Reveals a Wet Room-style Vibe
Read This Before You Hire an Architect

No comments made yet. Be the first to submit a comment

By accepting you will be accessing a service provided by a third-party external to https://smithsell.com/